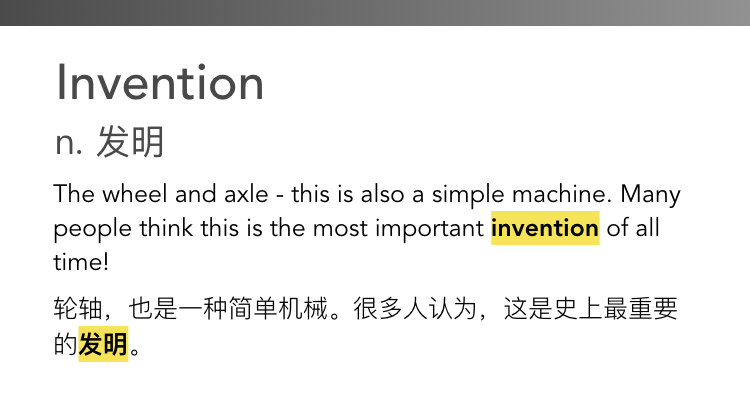 Simple machines have been used for thousands of years, enabling ancient people to build the most amazing structures, and today’s modern architecture could not be built without them.

A simple machine is a device that makes work easier.

It can be used to multiply a force or change its direction.

There are six different types of simple machines:

The first one is the lever. A lever is a stick or rod that rests on a point, called a fulcrum or pivot. A small amount of force is applied to the long end, which is converted to a larger amount of force at the small end.

Scissors, boat oars, and seesaws are all types of levers.

The wheel and axle - this is also a simple machine. Many people think this is the most important invention of all time!

It's much easier to move something heavy, if you can put it into something with wheels. Rolling causes much less friction than sliding or dragging.

The axle is a cylinder, attached to the middle of the wheel. The wheel and axle spin together. By applying a strong force to the axle, you can make a much larger wheel spin – like when you are riding a bicycle, or on a Ferris wheel.

Sometimes you apply the force to the wheel, which turns the axle, like when you turn a door knob.

Wheels and axles are used for all kinds of transport... Very big, and very small.

A gear is a wheel with teeth, sometimes called a cog. When one gear is turned, the other moves as well. Because the gears are different sizes, they can be used to increase the force. The smaller gear turns more quickly but with less force, turning the bigger gear more slowly with more force.

Gears are used in lots of different things, like clocks and watches, tin openers and even fun fair rides!

An inclined plane is a flat surface with one end higher than the other. It works like a ramp. It takes a lot less effort to pull or push a load up an inclined plane than to lift it straight up.

The longer and flatter the inclined plane, the smaller the force needed to move the object. But the steeper the plane, the harder it is to move something! You might use an inclined plane for fun!

A screw is an inclined plane wrapped around a cylinder. Screws can be used to join things together and also to lift heavy loads.

Screws with smaller threads require a smaller amount of force, because the item needs to travel a larger distance. The screw will turn more times.

A wedge is two inclined planes, back to back! It is used to separate things. A small force applied to the back of the wedge is concentrated at the narrow end - like a knife and an axe.

The last type of simple machine is a pulley. A pulley uses a wheel with a rope wrapped around it. It is used to lift heavy objects and it changes the direction of the force. When you pull down on a pulley, the object lifts up!

What kind of simple machines do you use?