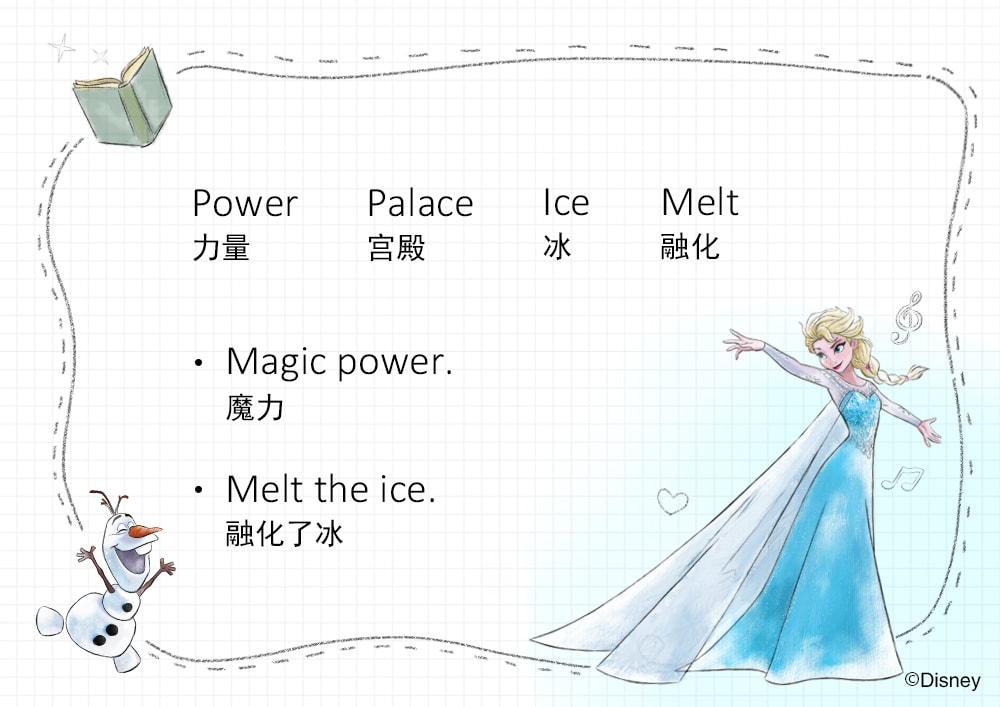 Princess Elsa and her younger sister Anna always played together when they were little.

When they were teenagers, their parents died in a storm. Elsa became the queen. People in the kingdom didn’t know that Elsa had magic powers. She could control ice and snow, but she didn’t know how to control her power.

One day,Anna argued with Elsa. Elsa, who was very angry, shot magic ice from her hands and hurt Anna.

Seeing Anna crying, Elsa felt so sorry. She was frightened by her power. She wanted to suppress her magic power, but she didn’t know how.

One day,Elsa accidentally used her power in front of her people. Everyone saw her power. The Duke seized the chance, and told the people that Elsa was a monster.

Everyone started to believe that Elsa was a monster. In the end, Elsa had to run away to the North Mountain.

Elsa used her power to build a palace of ice on the mountain. She lived in the palace all alone. But she didn’t know that her power had affected the whole kingdom,covering it with ice and snow.

Meanwhile,Anna missed her sister. She set out to the mountain to find Elsa.

When she arrived at the palace, Anna met her sister Elsa. Anna told Elsa that the Duke had taken control of the kingdom.

Elsa was angry, but she said she couldn't even control her own power, not to mention a whole kingdom.

Anna had to leave the ice palace alone, but soon she discovered that the Duke had sent a villain to kill Elsa. The villain used a sword to stab Elsa. Without hesitation, Anna stood in front of Elsa to protect her.

At that moment, Elsa suddenly learned to control her power. It was love that could control her magic power. Then Elsa used her power to drive away the Duke, and melt the ice and snow.

Elsa and Anna were reunited. They have learned to love and help each other.