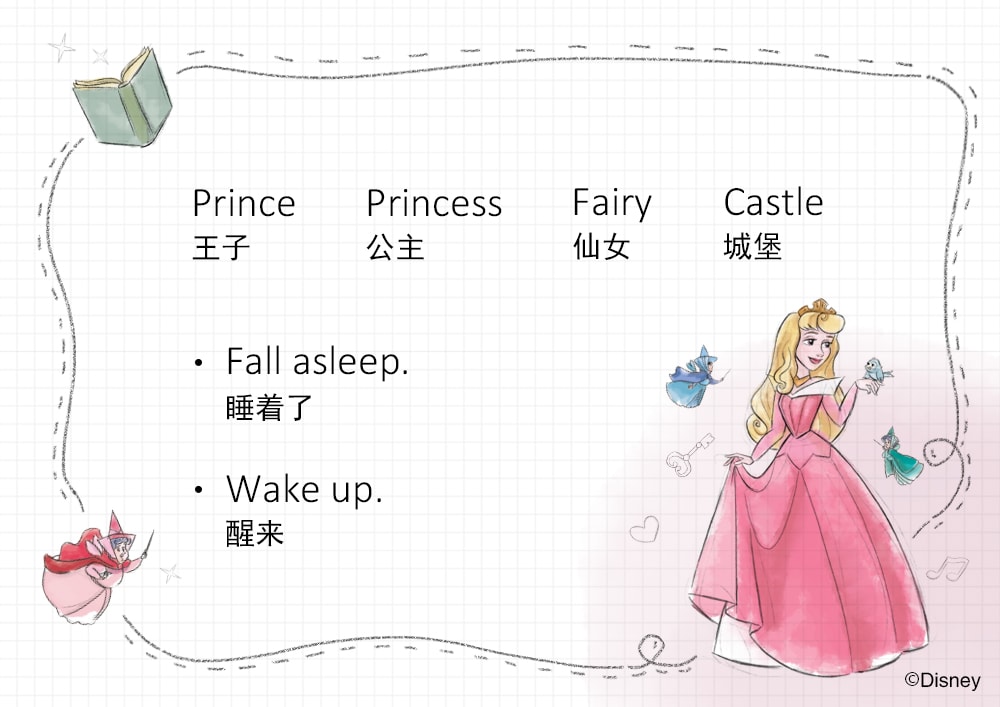 Once upon a time, there lived a king and a queen. One day, the queen gave birth to a beautiful baby girl— Aurora.

The king was very happy, and held a party for the newborn princess. He invited three good fairies to the party. The fairies blessed Aurora one by one.

Suddenly,an evil witch came to the party. The witch cursed Aurora: the princess would be hurt by a spindle and die at the age of sixteen. Then the witch left the party,before anyone could stop her.

Luckily, the good fairies were able to change the spell: the princess would not die. Instead, she would fall into a deep sleep. To protect her, the king and queen sent Aurora to live with the fairies.

Sixteen years passed quickly. Aurora, who has lived with the fairies in the forest all these years, did not know she was a princess.

On her sixteenth birthday, Aurora went out to pick berries. In the forest, she met a handsome man named Phillip. They immediately fell in love.

Aurora felt sad, and she wandered around the forest. After a while, she saw a strange green ball. She followed the ball into a castle, where she found a spinning wheel in a room. When she touched the wheel, she was hurt by the spindle! Aurora fell to the floor and was asleep immediately!

After along time, the three fairies found Aurora in the castle. They knew that only the prince could wake up Aurora. So, they found Phillip, who turned out to be a Prince, and gave him a magic sword.

Prince Phillip came to the castle to rescue Aurora. When he arrived, he ran into the evil witch. The witch turned into a dragon and fought with Phillip. In the end,Phillip used the sword to kill the witch!

Then the Prince ran to Aurora and kissed her. Aurora woke up! The spell was broken.

Phillip and Aurora were so happy to see each other again. They danced and laughed, and went back to the kingdom together.

They got married and lived happily ever after!