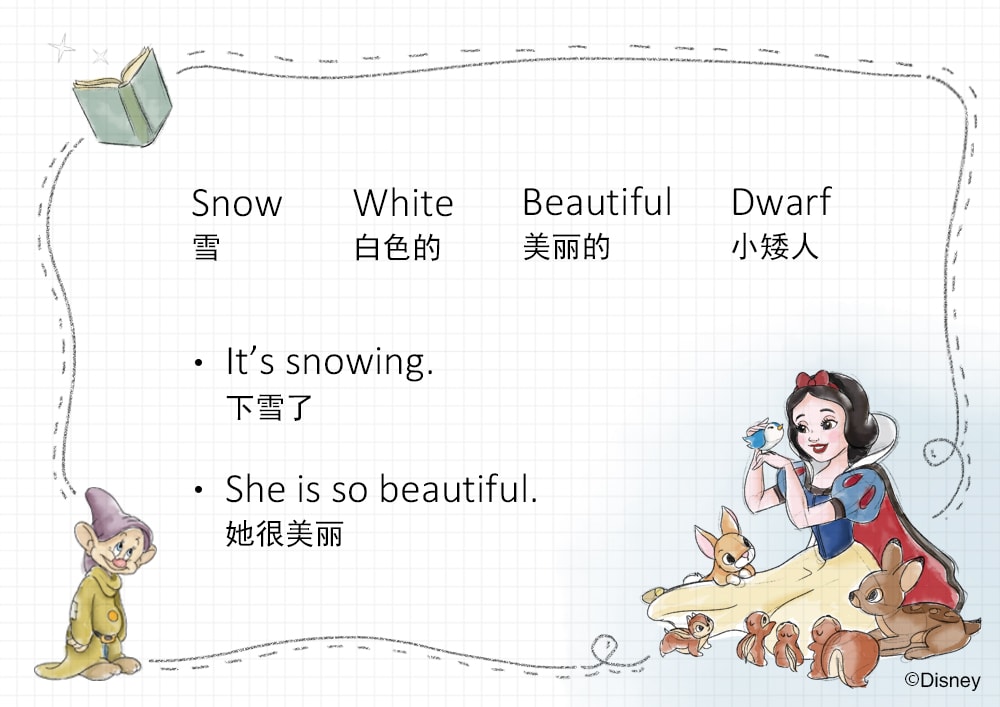 Once upon a time, there lived a beautiful princess named Snow White.

She was so beautiful that her stepmother, the evil Queen, was jealous of her. The evil Queen was not a good woman. She ordered a hunter to kill Snow White, but the hunter didn’t want to kill her. Instead, he took Snow White to the forest and let her go.

In the forest, Snow White got lost. After a while, many animals found Snow White, and they all liked her. They led Snow White to a little cottage. Snow White was very happy, and she helped clean the cottage.

Soon, the owners of the cottage—the Seven Dwarfs—came back from the forest. They found Snow White sleeping in one of their beds! They waited for Snow White to wake up. Then after talking with her, they became friends.

When the Queen found out that Snow White was not dead, she became very angry. She disguised herself as an old woman. Then she came to the forest, and offered a poisoned apple to Snow White. Snow White took a bite of the apple, and soon fell to the floor.

Snow White had been poisoned! She fell into a deep sleep. No matter what they tried, the Seven Dwarfs could not wake Snow White again. The Seven Dwarfs felt very sad. They picked flowers every day and placed them next to Snow White.

Then, one day, a Prince came to the forest. The Prince had known of Snow White for a long time and had always loved her. When he saw Snow White, he kissed her. Ah! Snow White opened her eyes! She is awake! Everyone cheered happily.

After that, the Prince took Snow White to his castle, and they lived happily ever after.