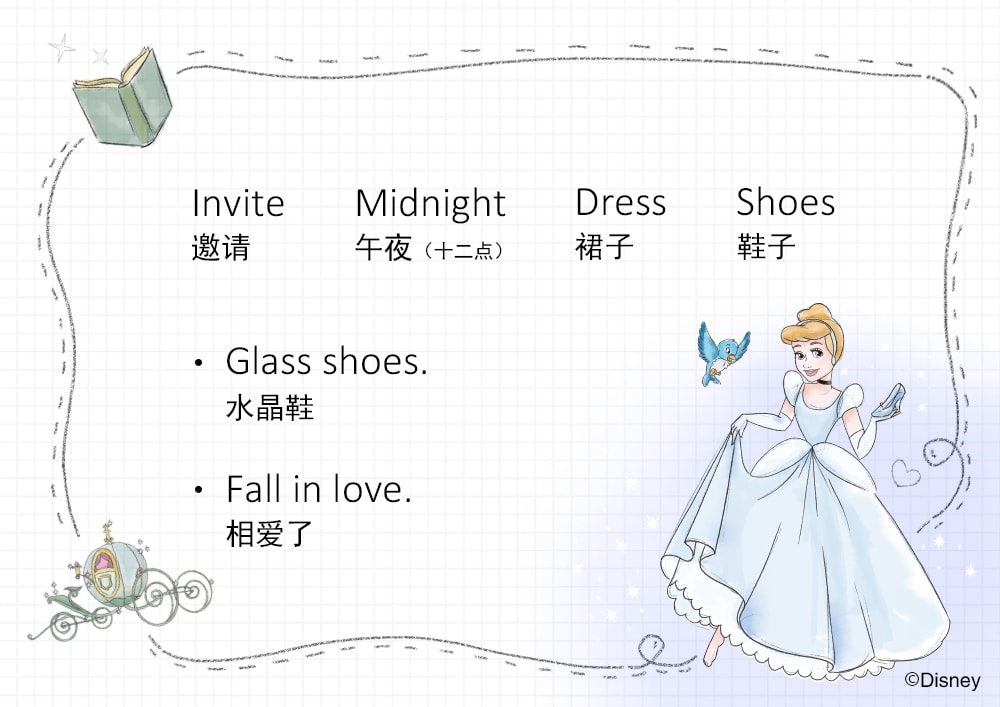 There once was a beautiful girl named Cinderella. Her mother died when she was little, and her father got married again. Cinderella had to live with her stepfamily, but her stepmother didn’t like her. Her stepmother forced her to do all the chores.

One day, the Prince in the kingdom decided to hold a royal ball. Everyone was invited, but Cinderella’s stepmother would not allow her to go the ball. Cinderella felt very sad. She cried after her stepmother and stepsisters left.

After a while, a fairy appeared. The fairy gave Cinderella a beautiful dress and shining glass shoes. She warned Cinderella to come home before midnight. Cinderella was so excited, and she left for the ball immediately.

When Cinderella arrived, her beauty attracted everyone’s attention. The Prince came to her, and they danced together, and the two fell in love.

Cinderella felt so happy, but she remembered it was almost midnight. She had to go home! She left the palace in a hurry and lost one of her glass shoes.

The Prince ran after Cinderella, but he only found one of her glass shoes. He wanted to see Cinderella again. The next day, he went from house to house. He was looking for the girl who could fit the shoe.

Finally, he came to Cinderella’s house. Cinderella’s two stepsisters tried on the shoe, but their feet were too big. Then Cinderella came out from the kitchen, and tried on the glass shoe. It fit perfectly. She was the girl! The Prince was so happy!

At last, Cinderella and the Prince got married. They lived happily ever after!