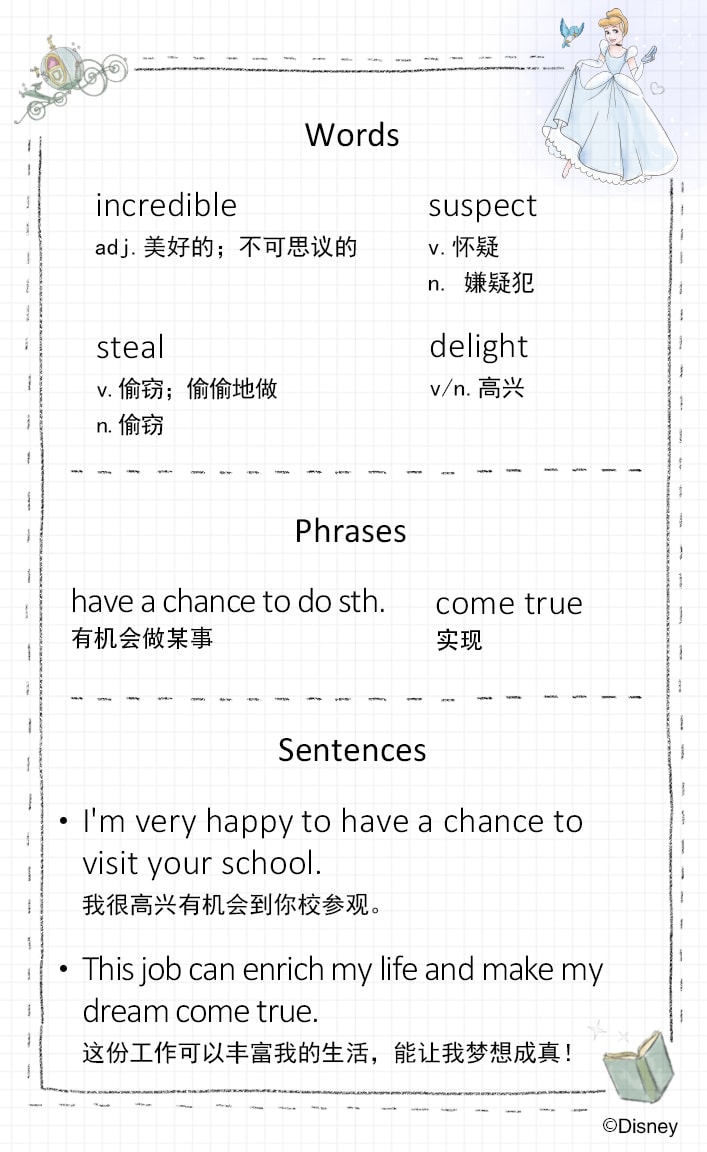 At the ball, the Prince was introduced to all the eligible maidens in the kingdom. Anastasia and Drizella curtsied (行屈膝礼) to him, but someone else caught the Prince’s eye.


The Prince hurried over to the most beautiful girl he had ever seen. He and Cinderella danced all night without even introducing themselves. Cinderella had no idea she was dancing with the Prince! She was having the most wonderful night of her life—and then the clock began to chime midnight.


Cinderella had forgotten about the time! She ran down the palace steps, losing a glass slipper along the way.


“Wait! I don’t know your name!” the Prince called.


The Grand Duke rushed after Cinderella, but she didn’t stop.


Cinderella and her friends made it through the palace gates before the spell wore off (消失) and everything turned back to normal. Her beautiful dress was gone, but thanks to her fairy godmother, Cinderella still had the memories of an incredible (美好的) evening—and one glass slipper!


Back at the palace, the King was furious (生气的) that the girl his son wanted to marry (结婚) had vanished (消失). He ordered the Grand Duke to find her.


Word spread that the Prince was searching for the girl who had lost a glass slipper. Lady Tremaine suspected (怀疑) it was Cinderella but didn’t know for certain. She didn’t want Cinderella to have a chance (有机会做某事) to try on the shoe. She locked the poor girl in her room just before the Grand Duke arrived.


The Grand Duke explained that every maiden in the kingdom was to try on the slipper. The girl who fit the slipper perfectly would marry the Prince!


While Anastasia and Drizella tried to squeeze (挤进) their big feet into the dainty (精致的) slipper, Jaq and Gus stole (steal的过去式，偷) the key to Cinderella’s room from Lady Tremaine’s pocket and unlocked the door. Cinderella rushed downstairs just as the Grand Duke was preparing to leave.


Lady Tremaine could not allow Cinderella to try on the shoe! She tripped (绊倒) the footman, causing the glass slipper to fall and shatter (摔碎). But Cinderella surprised them all. She had the other slipper in her pocket. And, of course, it was a perfect fit!


Cinderella and the Prince were soon married, to the delight (高兴) of the King. But no one was happier than Cinderella, whose dreams had come true (实现) at last!