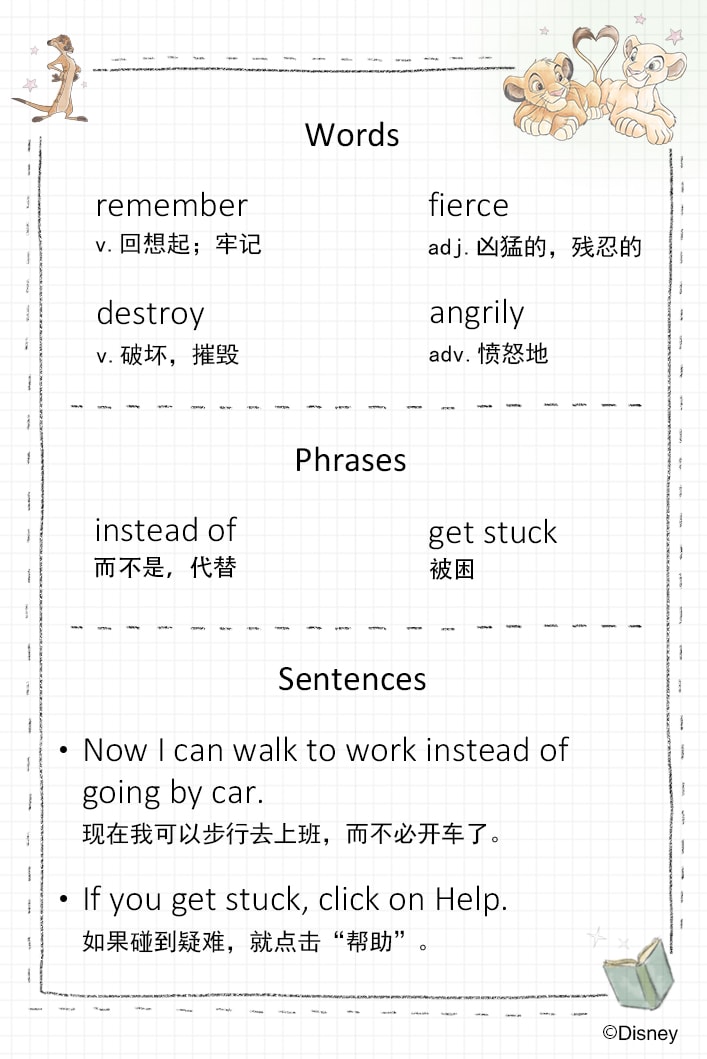 Scar sent the hyenas out to kill Simba, but the cub escaped them once more.

Scar was certain that Simba was dead. He went back to Pride Rock and told everyone the news. “It is with a heavy heart,” he lied, “that I become your new king!”

Everyone in the Pride Lands mourned (哀悼) for their beloved king and Simba.

Meanwhile, Simba was far away from the Pride Lands. The ground turned dry and crack (有裂缝的) beneath him. The hot sun beat down as vultures (秃鹰) circled above his head.

Exhausted (筋疲力尽) and unable to go any farther, Simba slumped (晕倒) to the ground.

After a long while Simba awoke. Everything around him looked different. There were trees and

grass and flowers instead of (而不是) desert.

A meerkat (猫鼬) named Timon (丁满) and a warthog (野猪) named Pumbaa (彭彭) had brought him to their home. “You nearly died,” said Pumbaa.

“We saved you!” cried Timon. Thanking them, Simba stood up and started to leave.

Pumbaa asked Simba where he was from, but Simba didn’t want to answer. “I did something terrible . . . but I don’t want to talk about it.”

“You gotta put your troubles behind you, kid,” said Timon. “No past, no future, no worries…hakunamatata (哈库拉马塔塔)!” Simba decided to stay with his new friends.

Years passed and Simba grew into a young lion.

One night while looking up at the stars, Simba remembered (回想起) his father’s words. “Someone once told me that the great kings of the past are up there, watching over us,” he said to his friends.

The next day, Pumbaa was chasing a bug when a fierce (凶猛的) lioness sprang at him from the tall grass. He screamed (大叫着) and ran away, but got stuck (被困) beneath a fallen tree.

“She’s gonna eat me!” he squealed (尖叫着说). Simba heard his friend’s cries and rushed to help.

Simba wrestled (扭打起来) with the lioness, but then realized (意识到) she was his old friend Nala. “You’re alive!” she said happily. “That means you’re the king!”

Nala told Simba how Scar had destroyed (破坏) the Pride Lands. “Simba, if you don’t do something, everyone will starve (饿死).”

“I can’t go back,” said Simba angrily (愤怒地), and he turned and walked away.

Simba thought about what Nala had said. “I won’t go back,” he said to himself. “It won’t change anything.” Just then, Simba heard a chanting (反复有节奏的) song from the jungle.