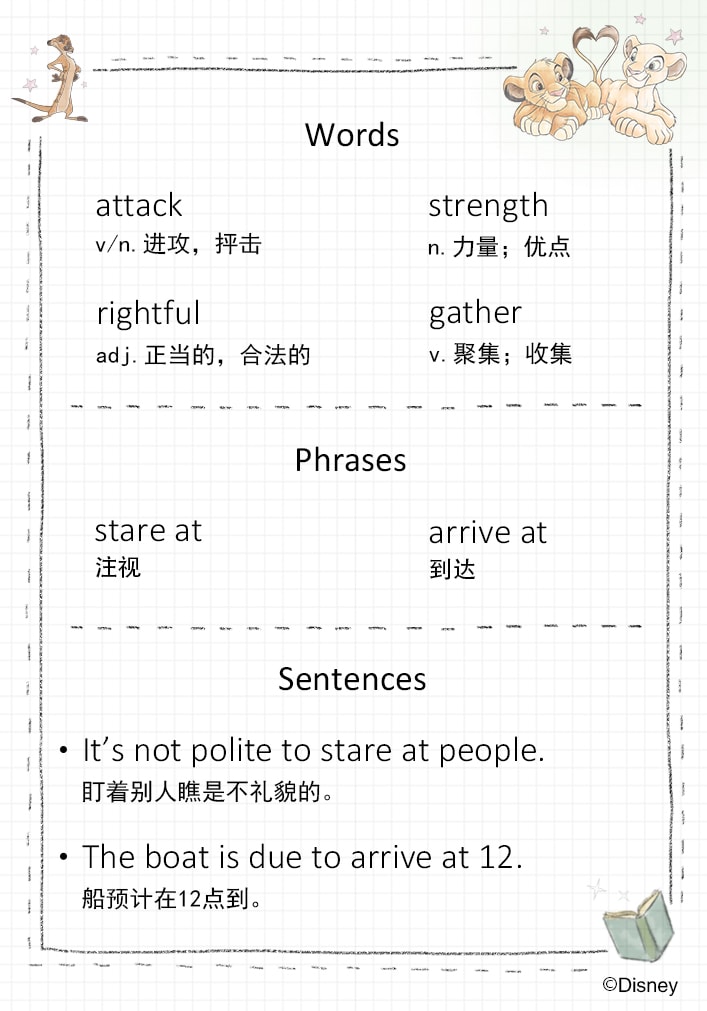 Rafiki the baboon came walking toward him. “If you want to see your father again, look down there,” Rafiki said, pointing into the pool of water next to them.

Simba saw the face of his father staring (凝视) back at him. “You see?” said Rafiki. “He lives in you!”

Now Simba looked up and saw his father’s face in the stars and heard his voice. “Look inside yourself, Simba. Remember who you are…you are my son and the one true king.”

The next morning Rafiki found Nala, Timon, and Pumbaa. He told them that Simba had returned to the Pride Lands. “He’s gone back to challenge his uncle!” cheered Nala.

When Simba reached the Pride Lands, he was saddened by what he saw. His homeland that was once green and beautiful had turned barren (贫瘠的) under Scar’s rule.

When Simba arrived at (到达) Pride Rock, he let out a roar (怒吼) that shook the earth. Scar was surprised and frightened. He thought the hyenas had killed Simba long ago.

“This is my kingdom!” shouted Simba. “Step down, Scar.”

Scar ordered his hyenas to attack (进攻). They surrounded Simba and drove him to the edge of a cliff.

Simba grabbed onto the rocks with his claws as Scar stood above him. “That’s just the way your father looked before I killed him,” snarled Scar.

Then Simba realized that it had been Scar who killed his father. With new strength (力量), Simba lunged (猛冲) onto the rock and attacked.

At that moment, Nala, Timon, and Pumbaa arrived and a battle broke out on Pride Rock.

This time, Simba trapped Scar at the steep edge of Pride Rock. Sparing his life, he ordered his uncle to run away and never return.

Scar pretended (假装) to leave, but then turned and lunged at Simba. Simba swiped (挥动) his great claw and Scar fell to his death in the gorge (峡谷) below.

Simba took his rightful (合法的) place as the Lion King and once again the land flourished (焕发生机). Soon all the animals gathered (聚集) at Pride Rock to celebrate the birth of Simba and Nala’s cub. The Circle of Life would continue.