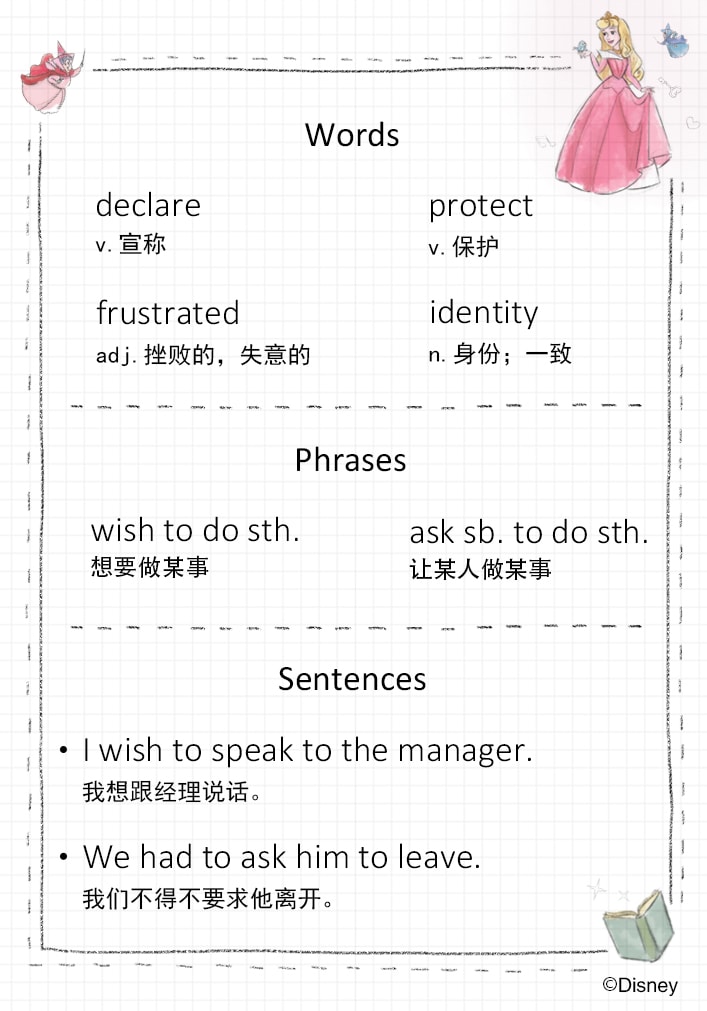 Long ago, in a faraway land, King Stefan (史蒂芬国王) and his queen had a baby girl named Aurora (爱洛). A great holiday was proclaimed (宣布) throughout the kingdom. Everyone was invited to the castle to celebrate the arrival of the new princess.

Jolly King Hubert (休伯特国王) and his son Phillip (菲力) came from a neighboring kingdom to congratulate the new parents. Wishing (想要) to�unite their kingdoms, the two kings decided that Phillip and Aurora would marry one day.

The three good fairies—Flora (花拉仙子), Fauna (翡翠仙子), and Merryweather (蓝天仙子)— arrived with special gifts for Princess Aurora. Flora presented the baby with the gift of beauty. Fauna gave the tiny princess the gift of song.

Suddenly, the evil fairy Maleficent (梅尔菲森特) appeared in a blast of fire and smoke. She was angry that she hadn’t been invited. She sneered at the crowd and declared (宣布), “Before the sun sets on her sixteenth birthday, she shall prick (刺) her finger on the spindle (纺锤) of a spinning (纺纱) wheel and die!”

The castle guards rushed to capture�(逮捕) Maleficent, but she vanished in a flash of lightning.

Luckily, Merryweather still had a magical gift to give the princess. The good fairy couldn’t undo Maleficent’s curse (诅咒), but she was able to change it. Aurora would now fall into a deep sleep if she pricked her finger. As a vision of the sixteen-year-old princess materialized (显现), the good fairy promised, “You shall wake when True Love’s Kiss (真爱之吻) the spell shall break.”

Fearful for (担心) his daughter’s life, King Stefan had every spinning wheel in the kingdom destroyed. Flora came up with yet another plan to protect (保护) the princess. The good fairies would disguise themselves as peasant women and raise Aurora deep in the forest. They would do everything without magic, so Maleficent wouldn’t suspect (怀疑) a thing.

King Stefan and the Queen knew Flora’s plan was for the best. They watched with heavy (沉重的) hearts as their only child disappeared into the night with the three good fairies.

Sixteen years passed. Maleficent was frustrated (沮丧) that her henchmen (手下) had never located the princess. She turned to her pet raven and said, “You are my last hope. Circle far and wide. Search for a maid of sixteen with hair of sunshine gold and lips red as a rose.”

In the forest, a happy girl named Briar Rose (蔷薇玫瑰) greeted the day from her cottage window. She did not know she was really the princess Aurora and that her “aunties” were the good fairies.

It was Briar Rose’s sixteenth birthday. The fairies wanted to surprise her with a cake and a dress—and the truth about her royal identity (身份).