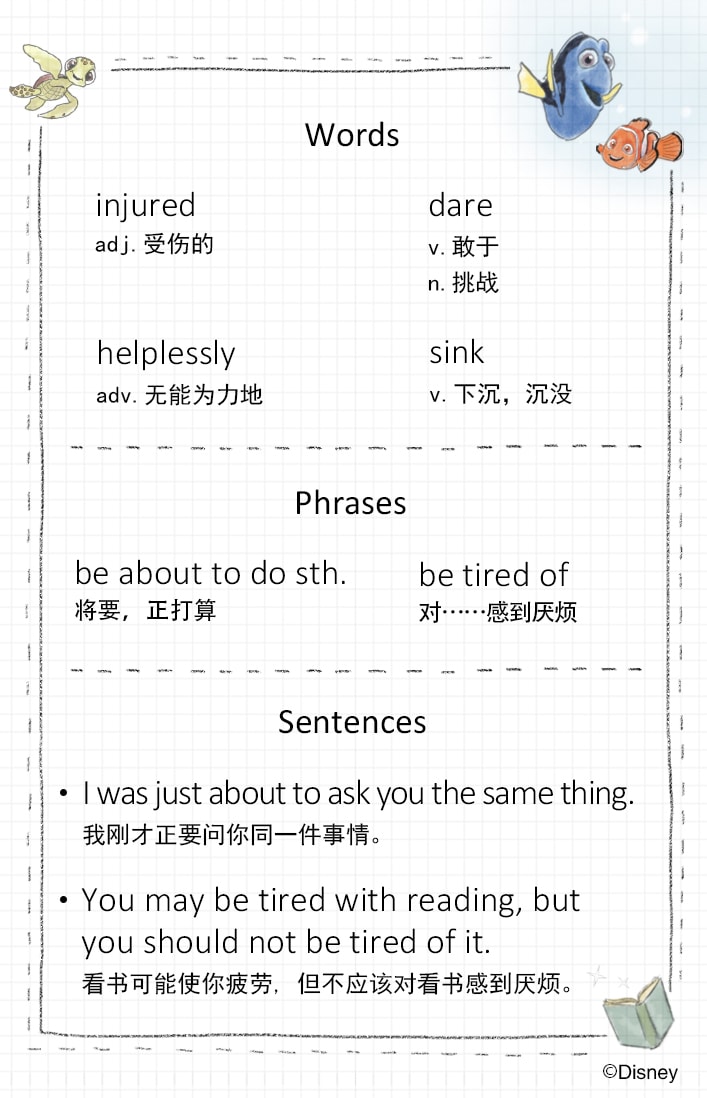 At the edge of the Great Barrier Reef (大堡礁) in Australia (澳大利亚), a mother and a father clownfish (小丑鱼) watched over the grotto (岩穴) where their eggs were about to (将要) hatch (孵化).

Suddenly, a hungry barracuda (梭鱼) appeared! Marlin tried to protect Coral and the eggs, but the barracuda knocked him out cold.

Marlin awoke to discover that one tiny, injured (受伤的) egg was all that was left of his family. He cradled (小心地捧起) the egg in his fin (鱼鳍). “I promise I will never let anything happen to you . . . Nemo,” Marlin said.

From that day on, Marlin was very protective of his son— especially since Nemo was born with one fin that was smaller than the other.

When it was time for Nemo to go to school, Marlin was nervous.

The teacher, Mr. Ray (雷老师), assured (使放心) Marlin that Nemo would be safe. But Marlin panicked (惊慌) when he learned that the class was going to the Drop-off (峭壁)—the very cliff where the barracuda had attacked his family!

While Mr. Ray taught the class about ocean life, Nemo and three of his new friends sneaked (溜走) away to the edge of the Drop-off. They dared (敢做) each other to swim up and touch a boat anchored (抛锚) nearby.

Marlin, who had been following Nemo, swam into view and told Nemo they were going home. “You think you can do these things, but you just can’t!” he said.

Nemo was tired of (对…感到厌烦) hearing that he was too little and weak to do anything! So he swam to the boat and defiantly (挑衅地) hit it with his fin.

Marlin looked on helplessly (无能为力地) as the diver scooped (捉住) Nemo up and swam to the surface.

As the boat sped away, a scuba (潜水) mask fell overboard and sank (下沉) into the ocean.

“Has anyone seen a boat?” Marlin cried to some fish swimming by. “They took my son!” But no one would help him.

Finally, a blue tang (蓝藻鱼) named Dory (多莉) told him she had seen a boat. “Follow me!” she said.

Unfortunately, Dory couldn’t remember anything for more than a few minutes. When she turned and saw Marlin, she got angry. “Stop following me, okay?” she cried.