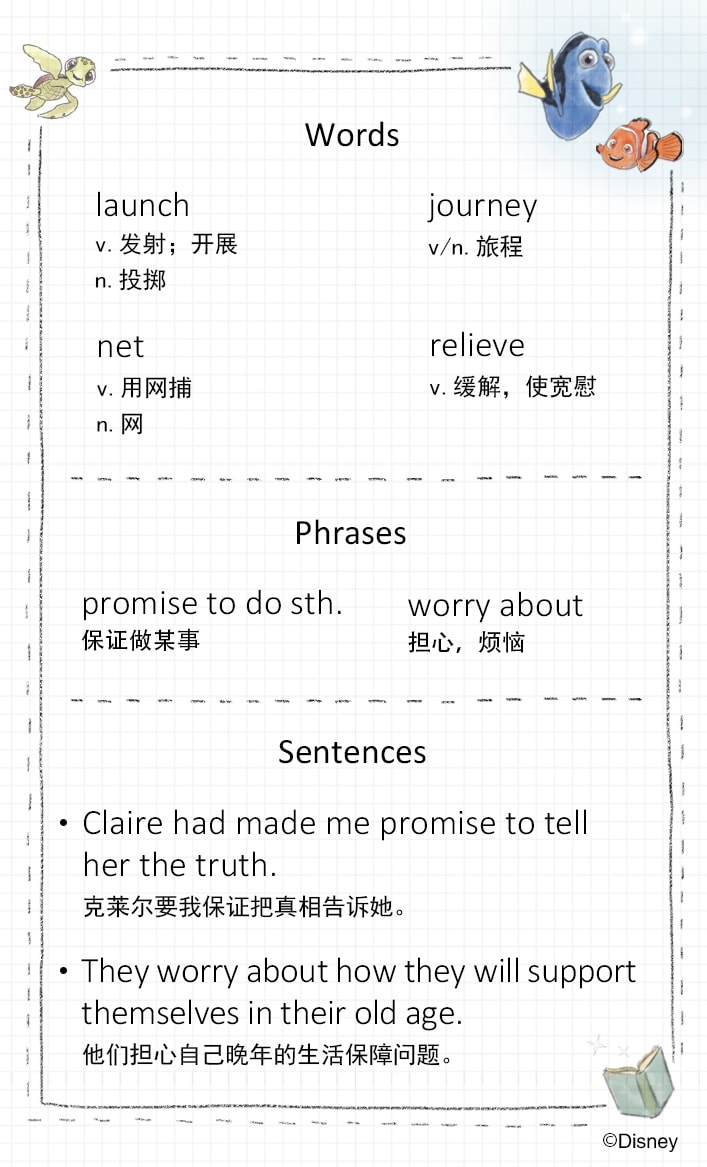 But instead, the dentist dropped Nemo onto a tray next to Darla. A dental tool pierced (穿破) the bag and it began to leak.

Suddenly, Nigel flew in the window with Marlin and Dory in his beak. Marlin saw Nemo floating upside down and feared the worst. Dr. Sherman pushed Nigel back outside before Marlin could get to his son.

Darla picked up Nemo’s bag and shook it. The tank fish knew they had to do something to save Nemo. So they launched (发射) Gill out of the tank—and onto Darla’s head!

Darla screamed and let go of the bag, and Nemo fell out onto a dental mirror!

Gill flipped (弹) himself onto the tray beside Nemo.

“Tell your dad I said hi,” he said. Then Gill smacked (拍) his tail on the dental mirror, catapulting (弹) Nemo into the spit sink (吐水槽). The little fish escaped down the drain!

Back in the harbor, Nigel dropped Dory and Marlin into the sea. Marlin was heartbroken. He thought Nemo was gone forever.

Marlin thanked Dory for her help and said goodbye. Then he swam off and began his long journey (旅程) home.

Meanwhile, Nemo was riding the pipes through the water-treatment plant. When he came out, a hungry crab greeted him with its snapping claws. Luckily, Nemo quickly swam away before the crab could eat him.

Nemo bumped into Dory—and Dory promised (保证) to help him find his father. They learned that Marlin had gone to the fishing grounds.

Dory and Nemo finally found Marlin, but they had no time to celebrate. A net (渔网) swept Dory up along with a school of groupers (石斑鱼)!

But Nemo knew how to free everyone. He told Marlin, “Dad, I can do this.” Marlin nodded and let Nemo try his plan.

Nemo bravely plunged into (挤进) the net and told everyone to swim down. His plan worked. The net broke open and the fish escaped!

Dory and Marlin found Nemo beneath the net. Marlin was relieved (如释重负) when Nemo’s eyes fluttered open. He was okay!

A few weeks later, Nemo was ready to go back to school. As Nemo got ready for class, Marlin realized that he didn’t have to worry about (担心) his son so much.

Nemo gave Marlin a big hug before heading off. “Love ya, Dad,” said Nemo. “I love you, too, son,” said Marlin.