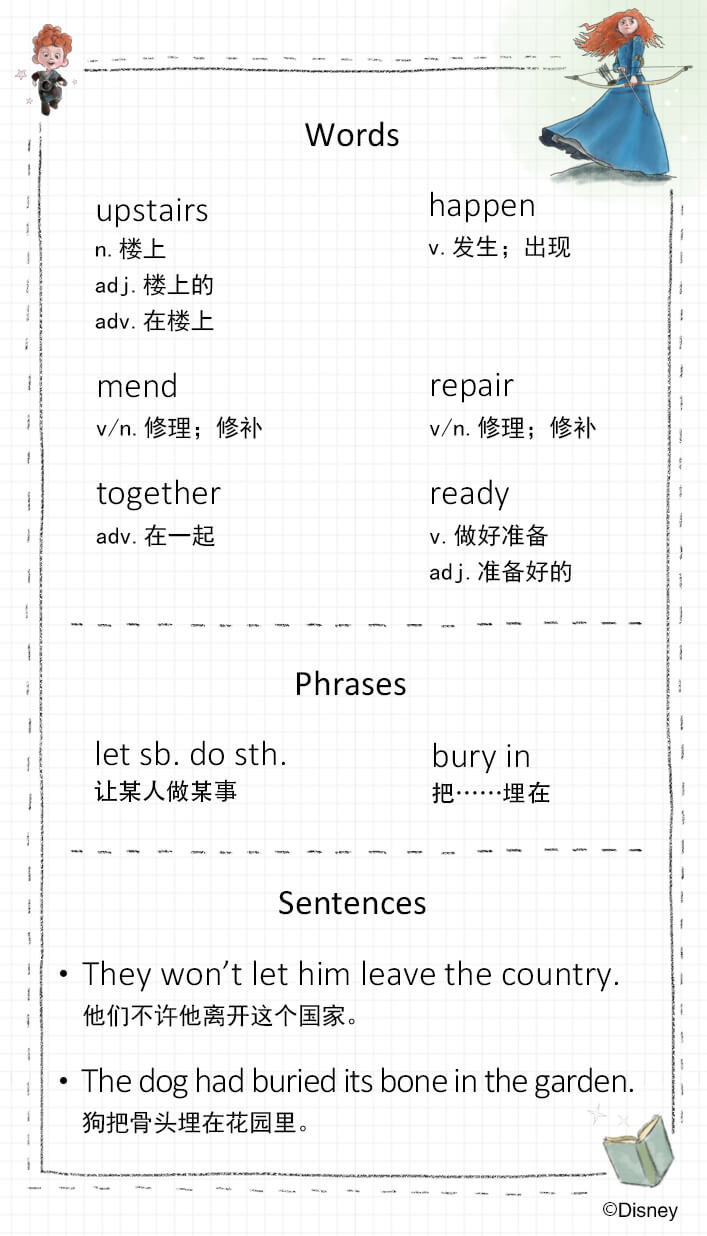 As soon as they could, Merida and her mother raced upstairs (楼上) to get the tapestry.

Just after they entered the room, Fergus burst in—and saw the bear!

The king swung his sword. Elinor ran out the door and down the hallway. The clans chased her as she escaped from the castle.

Merida tried to explain to her father what had happened (发生), but Fergus didn’t believe her. He locked Merida in the Tapestry Room to keep her safe. Then he raced off to hunt the bear.

Meanwhile, the triplets had eaten the magic cake and become bears, too! Merida had to fix the tapestry to save her mother—and her brothers. After the triplets freed their sister, they all climbed onto Angus and raced after their mother. All the while, Merida mended (修补) the tapestry.

Merida found the hunters at the Ring of Stones. The men had captured Elinor.

“I won’t let (让…做) you kill my mother!” Merida cried. She swung her sword at King Fergus’s wooden leg, chopping (砍断) it clean off!

Suddenly, Mor’du burst into the Ring of Stones. The clans rushed to attack him, but they were no match for the beast.

Mor’du quickly closed in on Merida.

Determined to protect her daughter, Elinor gathered her strength and broke free. Then she charged Mor’du.

The battle won, Merida wrapped the mended tapestry around Elinor. But nothing happened.

“I don’t care what you are,” she cried. “You’re still my mum. I love you.” Merida buried (埋藏) her face in Elinor’s fur and wept as dawn began to break.

As she wept, Merida felt a hand stroke her hair. She looked up. Her mother, back to her old self, was smiling down at her. The bond between them had been repaired (修好的). The spell was broken.

Soon Merida and Queen Elinor were spending more time together (在一起) and enjoying each other’s company. The queen knew Merida would marry (结婚) someday—but not until she was ready (准备好的). And Merida knew that she didn’t want to change anything about her mother. She loved the queen just the way she was.