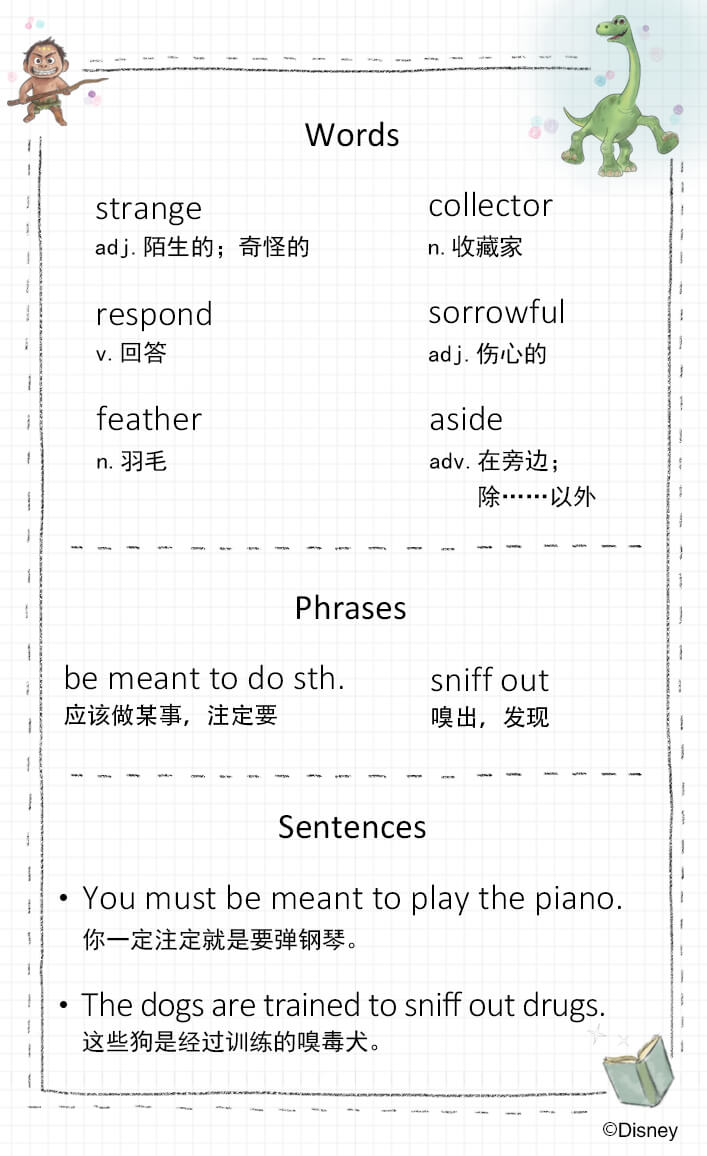 
Just then, a strange (陌生的) Styracosaurus (戟龙) emerged from the woods. He was a pet collector (收藏家)—and he wanted the boy to be his new pet! The dinosaur decided that whoever gave the boy a name he would respond (回应) to could keep him.


The Styracosaurus harrumphed (发哼声). Clearly, Spot was meant to (注定要) be with Arlo.


After nightfall, Arlo and Spot found a place to camp by the river.


Spot stared at Arlo, and then he leaned back and howled. The boy missed his family, too. Arlo let out a long, sorrowful (伤心的) howl of his own.


Together, Arlo and Spot continued walking along the river. Without warning, the sky unleashed (释放) a powerful storm! It reminded Arlo of the day he had lost Poppa. Arlo was so frightened that he ran aimlessly (漫无目的地), looking for a place to hide. Spot followed close behind. They finally took shelter under the roots of an overturned (倾覆的) tree.


After the storm, there were fallen trees everywhere. “Help!” Arlo called, and a pack of Pterodactyls (翼手龙) descended (从…下来) from the sky.


At first, Arlo thought they were friendly. But the Pterodactyls attacked and tried to fly off with Spot!


Arlo grabbed Spot and ran as fast as he could. He thought he saw other dinosaurs like himself and
yelled for help. But they turned out to be T. rexes (霸王龙)! Arlo and Spot were sure they were doomed!


To Arlo’s surprise, the T. rexes were friendly. Butch (布奇) and his two children, Nash (纳什) and Ramsey (拉姆齐), were out searching for their lost herd (兽群) of longhorns (长角牛). That gave Arlo an idea.


“Spot can sniff out (找到) anything,” he said. “He can find your longhorns.” In return for their help, the T. rexes promised to lead Arlo and Spot back to the river.


Spot picked up the longhorns’ scent quickly and started barking. When Butch saw the feather (羽毛) Arlo found, he grunted. He knew what that meant—their herd had been stolen. “Rustlers (偷牛贼). We gotta move!”


The herd was grazing (吃草) over the next ridge. But the rustlers were hiding in the tall grass. Butch wanted Arlo to lure them out.


“What if they have claws and big teeth?” asked Arlo.


Arlo climbed onto a large rock but was too scared to do anything. Spot helped by biting his leg. CHOMP!


The rustlers, who were actually a group of Raptors (迅猛龙), charged! The T. rexes sprang into action, fighting off the Raptors while trying to control the herd. “Giddy up! Come on now, giddy up!” they shouted.


Soon the Raptors had Butch pinned to the ground! Arlo pushed aside (在旁边) his fear and head-butted the Raptors away. When the fighting was all over, the T. rexes had their herd back.