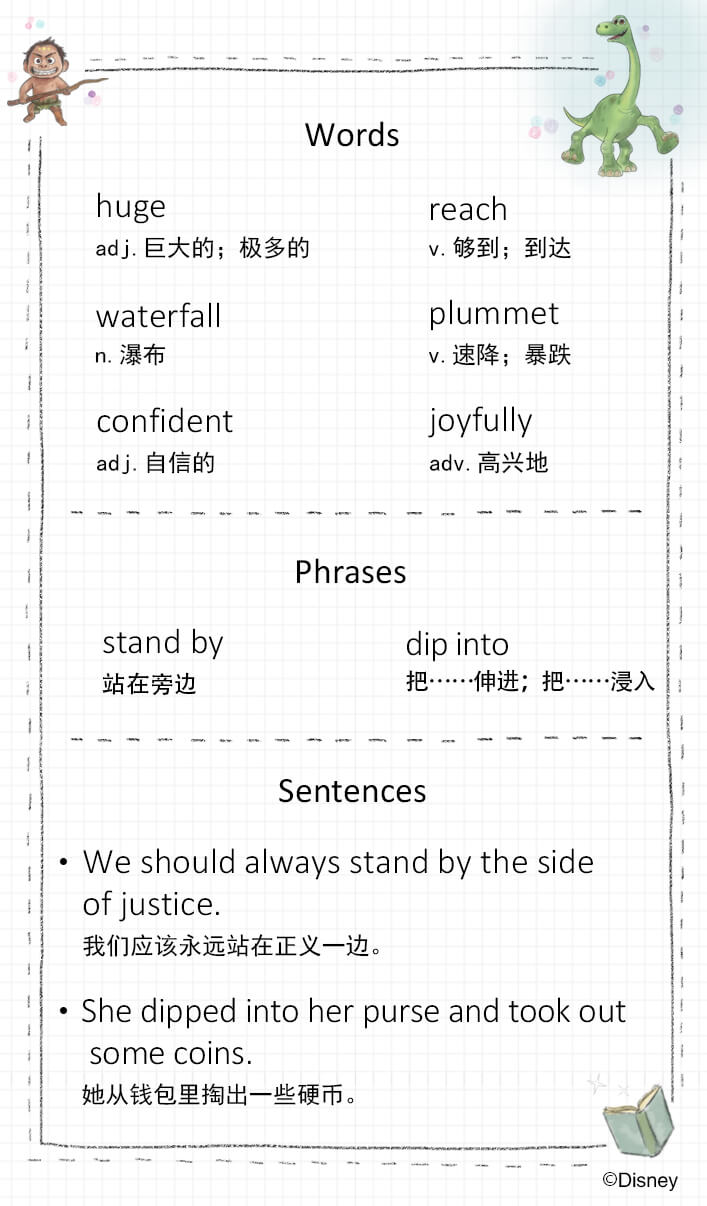 
All of a sudden, a flash flood churned (翻腾) through the pass. Arlo leaped in front of a huge (巨大的) wave and tried to reach (够到) Spot. But the water snapped Spot’s tree at the base. It pushed Arlo’s friend even farther away from him.


Arlo was determined to save Spot. He fought the strong current and swam until he and Spot were back together. Unfortunately (不幸地), they were headed for a waterfall (瀑布)! The friends held each other tight and plummeted (速降) over the edge!


Arlo and Spot splashed (溅落) into a deep pool. After a few moments, they burst to the surface and gasped for air. They were okay! Arlo got them to shore—exhausted but safe.


The next morning was sunny and clear as they began the last day of their journey home. The farm was in the distance. Spot howled a happy howl.


The howl was returned. The human man had come back. And this time, he had brought his family. Spot went to them and sniffed. The mother and father smiled and gently tousled (使蓬乱) his hair. With his muzzle (鼻口部), Arlo drew a circle around Spot and the others.


Spot climbed onto Arlo, but the dinosaur set him on the ground. Spot tried to climb back on, but Arlo pushed him away. Arlo knew it was time for Spot to be part of a family again.


So the two friends said goodbye. As Spot walked off with his new family, Arlo heard him howl once more. And Arlo howled back.


Not long after, Arlo finally arrived home. At first, Momma didn’t recognize the strong, confident (自信的) dinosaur standing by (站在旁边) the silo. But then . . .


“Arlo!” she cried, and ran to her son. The family reunited joyfully (高兴地).


Arlo moved toward the silo and dipped (浸入) his foot into the mud. Then he put his footprint on the stone.


Arlo had done something big—and he had earned his mark.


Just as Poppa knew he would.