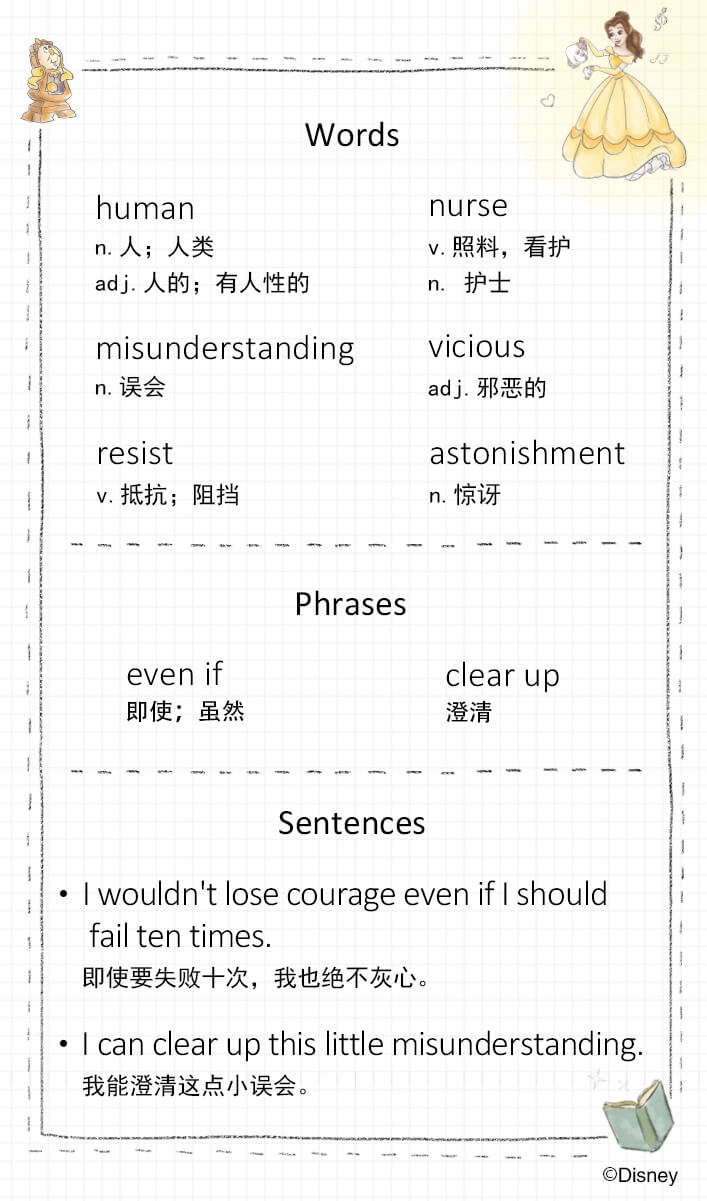 Beauty and the Beast


That evening, the Beast asked Belle if she was happy.


“There is a way.” The Beast showed Belle the magic mirror. In it, she saw her father lost in the woods, ill from his search for her. When the Beast saw the unhappy look on Belle’s face, he decided to let her go, even if (即使) it meant that he would never be human (人) again.


Before Belle left, he handed her the magic mirror. “Take it with you so you’ll always have a way to look back and remember me.”


Heartbroken (悲伤的), the Beast watched as Belle rode off on Philippe. When she found her poor father in the forest, Belle brought him home to their cottage so she could nurse (照料) him back to health.


But almost as soon as they arrived, a tall, thin man knocked on the door. It was M. D’Arque! He had come to take her father to an insane asylum!


Lefou had also convinced the villagers that Maurice was crazy because he was raving (胡言乱语) like a lunatic (疯子) about some terrible beast!


Gaston put his arm around Belle. “I can clear up (澄清) this little misunderstanding (误会)-if you marry me. Just say yes.” “I’ll never marry you! My father’s not crazy. I can prove it!”


Belle showed them the Beast in the magic mirror. “He’s not vicious (邪恶的). He’s really kind and gentle.” Enraged (使暴怒), Gaston shouted. “She’s as crazy as the old man! I say we kill the Beast!” The mob (暴民) of villagers locked Belle and her father in the cellar and stormed the Beast’s castle.


As the villagers battled the Enchanted Objects, Gaston forced the Beast onto the castle roof. He clubbed the Beast who didn’t even try to resist (抵抗). “Get up! Or are you too ‘kind and gentle’ to fight back?”


“Stop!” Chip had helped Belle and Maurice escape from the cellar. When the Beast saw Belle, he grabbed Gaston by the throat. But his love for Belle had made him too human. He let Gaston go and faced Belle.


Without warning, Gaston stabbed the Beast in the back! The Beast roared. Gaston stepped back, and tumbled (跌倒) off the roof to his death.


Wounded, the Beast gazed at Belle before he collapsed. She ran to him and held him in her arms. “No! Please! I love you!”


Suddenly, the rain began to shimmer (闪烁). Slowly, the Beast opened his eyes and in astonishment (震惊), he watched his paws transform into hands. He held them out to Belle. “Belle, it’s me!”


Belle hesitated and looked in his eyes. “It is you!” The Prince drew her close and kissed her. Then they watched happily as Cogsworth, Lumiere, Chip, Mrs. Potts, and all the other servants once again became human. True love had finally broken the spell, and everyone danced for joy.